If you’ve watched Friends, you’ll know of Emily, Ross’ second fiancée and his shortest marriage (which is saying something seeing as he Vegas-married Rachel). She gets mostly forgotten and is frequently the subject of hate, but is she really that bad?

It seems we’ve all just taken to binging Friends again since Netflix added it to its catalogue. This has highlighted that the world is pretty much split into three groups: lovers of Friends, haters of Friends, and folks who used to love Friends and then as they became more woke decided that Friends probably has a lot of problems and thought why can’t every show be like Brooklyn 99?!

Amongst the most problematic aspects of the show, the most prevalent issue is the character of Ross. He’s homophobic, entitled, rude, and sometimes just plain unlikeable. He’s the epitome of the toxic male “nerd” character whose entire arc revolves around their quest for a woman, which would be fine if they weren’t so damn sexist about it! It’s your classic Ted Mosby, Leonard Hofstadter trope that’s still the core of the straight white male storyline. And let’s face it, that’s pretty much every single storyline.

But Ross isn’t all bad, right? Sometimes he’s sweet, kind and caring and he exhibits these traits most prevalently when he’s in a relationship. And while that has its problems, it’s kind of nice, isn’t it? The idea that love can make us better humans is one that should be pure and unadulterated, so maybe Ross isn’t such a bad guy. You know, when he’s not “on a break” (Rachel totally deserved better). And clearly, Ross is at his most tolerable when he’s with Emily. She brings out his fun, likeable side and pushes him to do new things. So why is she hated on so much? Because Ross and Rachel were meant to be? Ross and Emily were happy and in love. That’s totally enough for them to have been endgame!

Emily is a sweet character, but she takes a downward spiral after the wedding. Rachel basically crashes their wedding because she suddenly realises that she’s in love with Ross and has to tell him how she feels. She ends up not doing it because she’s a decent person (if the roles were reversed it’s doubtful Ross would have granted her that courtesy) and it would have been a selfish thing to do. But her being there does get Ross all confused because in his head Rachel is his prize. If that’s not enough, she shows up to go to their honeymoon, that Ross is planning to go on with Rachel instead! Can you really blame her for getting the wrong idea? 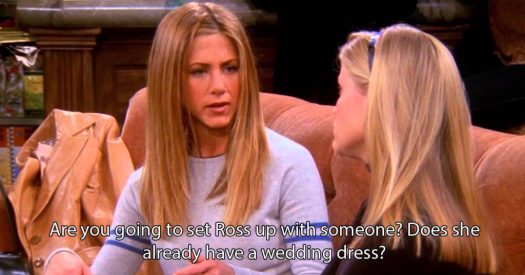 At first, Emily does fall victim to the common “women not supporting women” idea as she immediately blames Rachel. She doesn’t want Ross to be anywhere near her at all. It’s not a great look on her and it’s a shame that Rachel and Emily couldn’t have supported each other as friends outside the World of Ross. But Rachel isn’t perfect either, she does a similar thing when Ross is dating Charlie and is completely horrible to her instead of befriending her (or at least being honest and civil towards her).

But in the end, Emily makes the right decision to break up with Ross, as it’s him she doesn’t trust and she realises that it’s not Rachel’s fault. Ultimately, this is why Emily is a good character and had Ross not planned to go on his honeymoon with Rachel, they could have had a great marriage. It would have been great to see her as a character in her own right and not just Ross’ love interest. She’s not a bad person, she just does what is right for her and she can’t be villainised just because Ross is a massive idiot.

What do you think? Is Emily an underrated character? Do you sympathise with Ross? Are you a #Romily shipper? Let us know in the comments below or on our Facebook page!